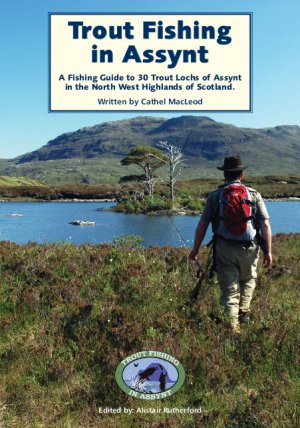 This is one of the lochs featured in a book - Trout Fishing in Assynt: A Guide to 30 lochs - which gives you the best, local expert advice there is about fishing this loch. The booklet, which helps fund local angling, is available from Inverbank Newsagents, Lochinver.

Known as the Sheiling Loch, this small water contains good numbers of lovely, silvery brownies that commonly average between 8-10ozs although fish well in excess of this weight are not uncommon.

Please tell us about your experience of fishing at this loch. This will help other anglers as well as local angling groups.

Your feedback is important so please tell us:

Got photos? Email them to us: anglingresearch@substance.net

Fished this loch from the boat on June 14th June. A quiet morning with light winds, quite overcast and I was in fear of the midges coming out until the breeze freshened at lunchtime and a hatch of mayflies got underway! I must have caught about 18-20 trout (lost count) in the afternoon, and should have done better as I missed plenty more. The largest were about 12 oz. Used barbless hooks and returned everything safely. I fished here many years ago and caught nothing, but this made up for that day! Great sport.

Colin Fionn
reply
This would have been a good day's fishing in May or June, but at the beginning of April, when it said 5 degrees on the car dashboard at 10am, it was quite unusual. After catching a couple of tiny ones in the loch to the N East (which looks a bit like a shark), caught 7 in Ruighein. All between half and a pound, with most around three quarters. They were fighting fit, especially given it is so early, and beautiful - I'd post a picture if I hadn't dropped my phone in another lochan the next day... All caught on the surface on either dry fly or sedgehog and lost the best one which shook the hook. Very gentle takes, but then they put up a fine fight.
Adam
reply
Fished Ruighein for the 1st time (with my dad) on 31st May (2011).
A path similar to the all abilities path has been built which now gives better access to "The Sheiling Loch" and its neighbour "The Loch Of The Barns".
After a 50 odd minute walk to the loch which looked great, we launched the boat. The wind was blowing from the SW putting a nice ripple on the water, and plenty of cloud cover.
We did a drift down the NE bank only catching a couple of small trout as we neared the small rocks sticking out the water towards the loch end.
We positioned the boat further out and drifted into the bay, both catching 1/2 pounders on size 12 sedgehogs.
After a few more drifts, we fished the east bank from the shore. Fishing all the way down to the north bank I hit plenty of fish catching 11 on the sedgehog, Kate Mclaren 12s and Mallard and Claret size 14, Nothing big 4-6 oz.
The wind had picked up by the time we finished and on the way back we caught a couple of small fish from the South bank of "The Barn Loch".
Again the walk back to the car park was around 50 mins.
Lochinvers Tourist Info office has a leaflet showing the new Loch An T-Sabhal Path as well as the Leiter Easaidh Path, its worth a look.
reply